Home 9 Blog ENG 9 Daimler: right on time for the 125th anniversary of the truck

On 18 August 1896 Gottlieb Daimler presented the very first motorised truck in the world. It was sold by Daimler to British Motor Syndicate, an automobile company in London. Exactly 125 years later a semitrailer arrives in London from Stuttgart: the current model of the Mercedes-Benz Actros has two historic trucks on-board, and so together with its own 25th anniversary, it is transporting the complete legacy from 275 years of commercial vehicle history. The journey is for a road show from Mercedes-Benz Trucks to mark the 125th anniversary of the truck and the Actros’s own birthday. The show will include the accurate replica of the first truck made by Daimler in 1896, that looked like a carriage with an engine and without a drawbar. This replica of the first truck was built in 1990 and cost around 100,000 German Marks.

The truck from 1896 was fitted with an engine, called “Phoenix”, which was a four-horsepower-strong two-cylinder engine located at the rear, with a displacement of 1.06 litres, originating from a car. Daimler linked it to the rear axle by means of a belt. There were also springs which protected the sensitive engine from being shaken up. The vehicle rolled on hard iron wheels, after all.

The second historic truck is an original vehicle that was once at home in the Transport Museum in Dresden. In 1898, Gottlieb Daimler and Wilhelm Maybach shifted the two-cylinder Phoenix engine, which had been located at the rear, to a position under the driver’s seat for this six-hp vehicle, with the four-gear belt drive also being transferred forward. However, this solution still left a certain amount to be desired. In the same year, the truck was given the design features which still apply up to this day for modern trucks and were to pave the way to increased output and payload: the engine was then placed right at the front, in front of the front axle. It conveyed its ten horsepower via a four-gear belt drive and a front-to-rear longitudinal shaft and pinion to the internal ring gears on the rear wheels.

The Actros chosen to transport the historic trucks started its journey to London – just like its historic predecessor – from Stuttgart-Bad Cannstatt. 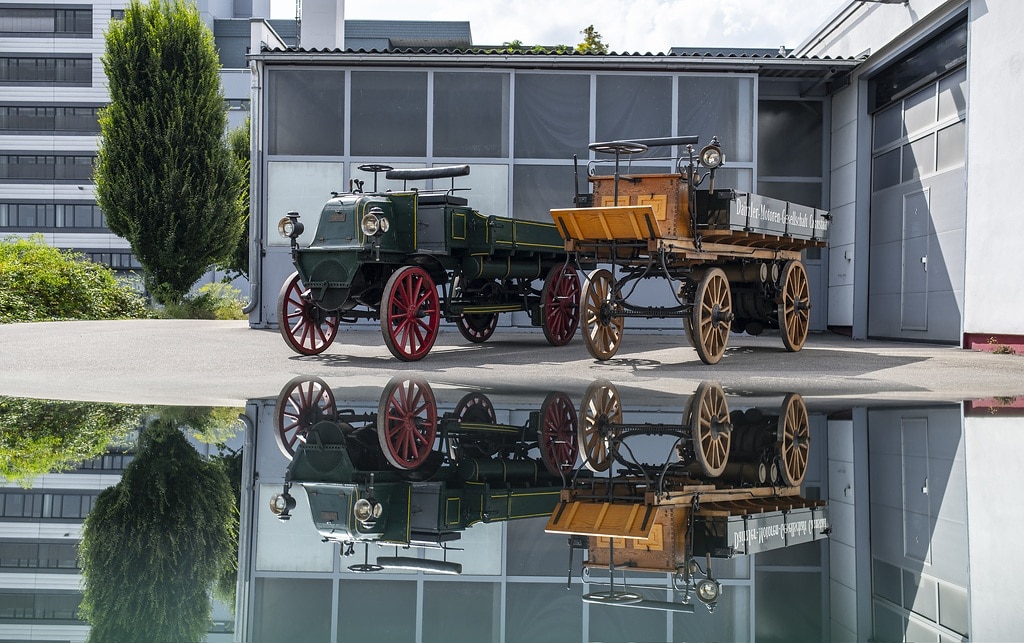