After about four months of training, Ladybird Logistics was proud to introduce its first class of women truck drivers to the world. This was by no means a mean feat in an industry that is still predominantly male-led; but with its current all-female driving force of 21, Ladybird is set to carve a unique niche in the market.

Held on 12th September 2018, the graduation ceremony attracted a cross section of key stakeholders who came together to witness history in the making.

Speaking at the graduation ceremony, MD of Ladybird Logistics, Payin Marfo, expressed her pride and optimism in the graduating class. She summed up the values of the company by stating, “When I am asked what we do as a company, I simply say, we recruit and train ladies to drive trucks.” She went on to express how much of an uphill climb it was to get the buy-in of stakeholders, some of whom where skeptical about how well women would do in the make dominated world of trucking, and how they overcame these challenges.

From the beginning, the odds seemed to be against success when, according to Marfo, “we only had one Ghanaian applicant and more than 40 South African applicants after a full month of advertising.” Fortunately, 11 brave and courageous ladies graduated after three and half months of theory, practical and physical training, thus bringing the Ladybird dream to life. She went on to thank stakeholders such as Women in Logistics & Transport, the Chartered Institute of Logistics and Transport, instructors from AFMTS, Scania, the WATA team, GIZ, and Zen Petroleum.

With a strong and dedicated team now in place, Ladybird looks forward to becoming the preferred logistics company in Ghana and across Africa, consistently delivering excellence with integrity and professionalism whilst empowering women. 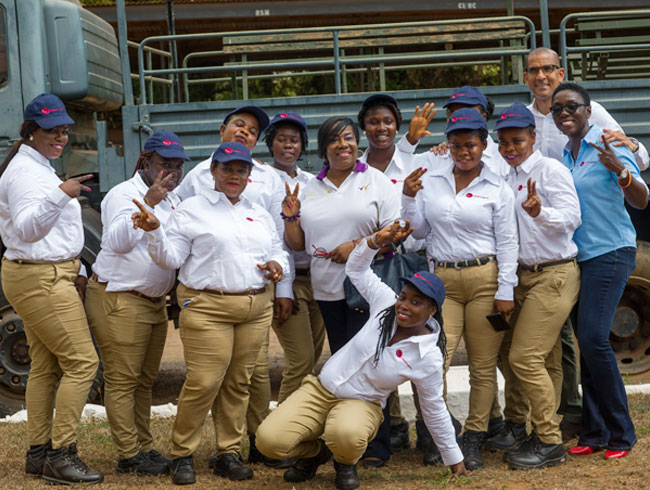