Wednesday 6 November, Pope Francis blessed the new MAN TGE vehicle donated by MAN Truck & Bus Italia. Together with its Dealer Network, MAN Truck & Bus Italia decided to make a contribution to the operational safety of the heliport located inside the Vatican City, by donating a fire-fighting vehicle to the Corps of Firefighters. The vehicle is fitted with state-of-the art technology and instruments, with a central monitor mounted above the cab, providing water and foam via remote control directly from the driver’s station, thus allowing operators to intervene in safety. A telescopic rod lamp ensures that the vehicle can continue operating at night or under poor visibility conditions. Goran Nyberg, Executive Board Member for Sales & Marketing of MAN Truck & Bus SE, attended the event.

MAN Truck & Bus, the leading German company in the production of industrial vehicles and buses worldwide, and part of the Volkswagen constellation has an ongoing commitment to social responsibility, focusing not only on the needs of its employees and clients, but also on the social context outside the company with dedicated initiatives.
These include the donation of this small technological gem from the Italian branch with its headquarters in Verona, which will be used to support the air ambulances operating on a daily basis at the heliport inside the Vatican City, managing emergencies for the Bambino Gesù Paediatric Hospital in Rome.
Pope Francis has always paid close attention and has a special affinity for these younger patients, also organising specific audiences for them at his residence at Santa Marta.

MAN Truck & Bus Italia is committed to solidarity initiatives, as well as a significant investment plan to strengthen its sales and service network, based on the decision taken by the head office in Munich, which has specifically stated that it believes in the Italian market.
Over the last two years, the branch in Italy has appointed around hundred new staff members on a permanent-contract basis and opened six new sales and service offices, bringing it closer to its customer base. This plan, which is currently being rolled out, envisages another four service centres being opened shortly, as well as several initiatives directed at training the technical and sales personnel needed to fully achieve its investment plan. 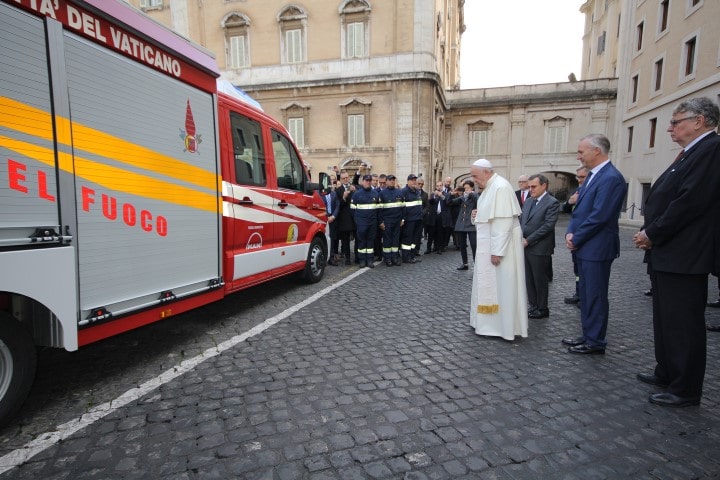