Mercedes-Benz Trucks is now offering the “ TopFit Set” as a genuine accessory for truck drivers who want to do something positive for their health while on the road. Designed and developed specifically for use in truck cabs, the set enables the parts of the body most subject to stresses in the professional working day of drivers to be strengthened, toned and kept fit.
According to a 2012 study by the Robert Koch Institute, around 80 percent of the German population suffer back ailments during the course of their lives, and in many cases these are also chronic. During a health monitoring survey by the research institute in March 2014, some 20.7 percent of adults in Germany reported that in 2013 alone, they had suffered chronic back pain at least once. Chronic back pain is defined as pain that persists for at least three months or longer, on an almost daily basis. Germany has backbone.
This is also the subject of a recent 2014 health report produced by the technical health insurance fund, which surveyed back ailments and the resulting absences from work. According to this, younger employees are also frequently afflicted with these ailments, which can seriously affect quality of life and the ability to work. The professional group of drivers of vehicles and transport equipment has an average sick rate of 24.1 days. A top score – in a negative sense.
Truck drivers need a fitness package “to go”
Ultra-modern trucks such as the Actros already have the best possible features for their drivers. Useful assistance systems, comfortable seats and well-designed beds are just some of them. Nonetheless, sitting for long periods of time is physically highly stressful, even though this often goes unnoticed – after all, all you are doing is “sitting”. However, it is just such a passive physical posture that places great stress on the muscles and spinal column if there is no compensating movement. In that case there is inadequate circulation to the blood vessels, muscle fibres and joints. The vertebral discs lose their elasticity, and the groups of muscles in the neck and in the upper and lower back, which have to support a weakened spinal column, stiffen up and begin to hurt.
This is particularly serious for professional drivers, as when they are on a tour they are unable to visit a gym for example at the end of the day as a preventive measure, or seek out a physiotherapist at short notice when acute back pain sets in. 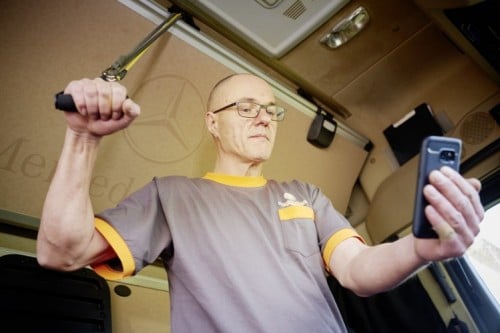