A Shock Absorbers for everybody

In the last decade, as far as trucks and trailers are concerned, pneumatic spring (air) suspensions have been more successful than the traditional systems with a trapezoid mechanical spring, commonly called «leaf spring».

Today almost all recently manufactured vehicles, travelling along European roads, are equipped with pneumatic spring suspensions, while trapezoid springs are still often used in certain geographical areas, such as Africa, where it is essential to make repairs and spare part finding as easier as possible. One of the most basic differences between leaf spring suspension and air spring suspension is that the latter can bear the same load and, at the same time, it can notably increase comfort and «fluidity» of the suspension as a whole.

Considered that this system is also more sensitive, a specific adjustment has been developed for each type of shock absorber. This problem affects the leaf spring to a lesser extent, even in the parabolic type, because the mechanical suspension is not able to «perceive» the resilience differences which are produced by air suspension.

That is why we discourage our customers from mounting a shock absorber designed for a certain application instead of another one, even if the basic dimensions are the same or similar.
The figure show the graphs relating to two Sabo shock absorbers for trailers which, while being virtually identical in terms of size, behave very differently under braking.

If one of these shock absorbers is mounted instead of another, the suspension would not work optimally, with negative consequences on the vehicle’s drivability and an uneven tyre wear.

In conclusion, we should never replace a shock absorber thinking «it should work well because size is more or less the same», especially when we are dealing with pneumatic suspension vehicles.
In case of any doubt, our technical/sales departments will suggest – by phone as well – the best alternative solution. 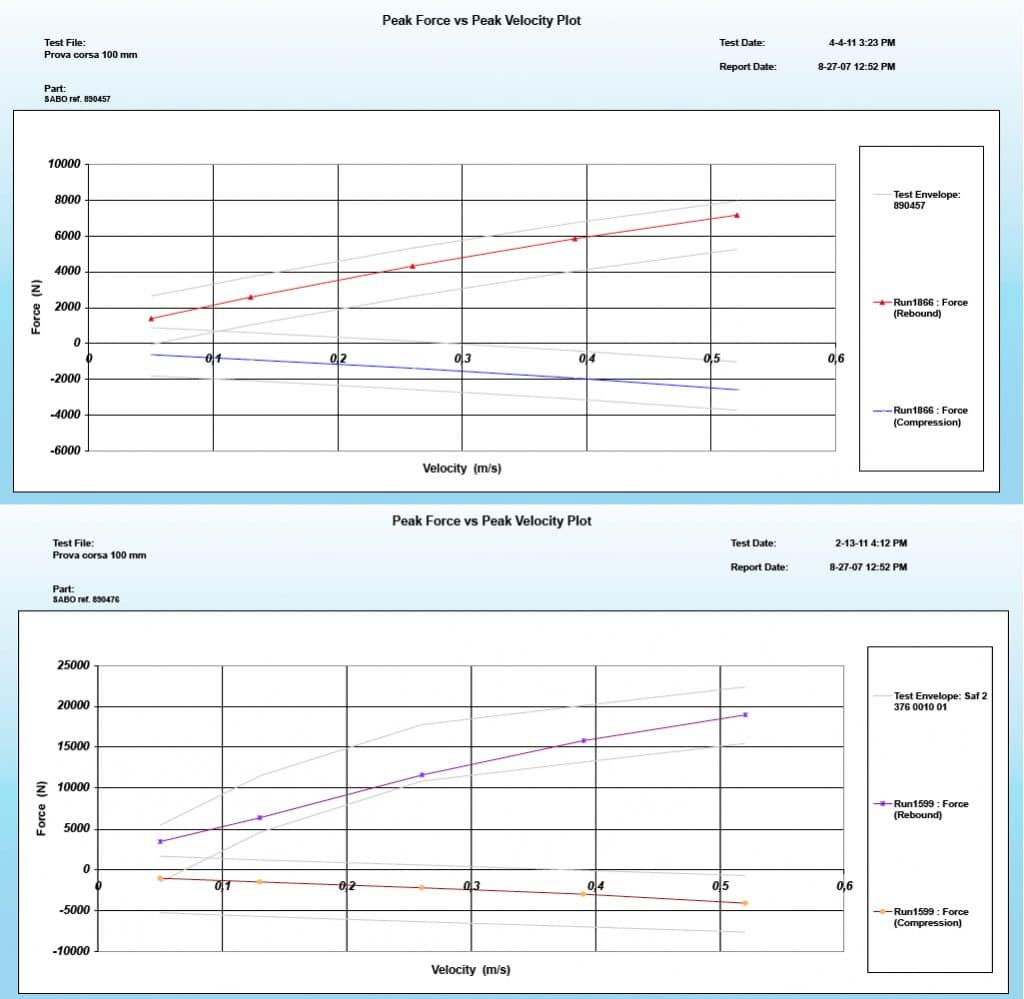 Manage Cookie Consent
This website uses cookies, including third-party cookies, to guarantee you the best experience on our website, analyse traffic to this website and provide you with social media features. You can change your preferences at any time by accessing the cookie settings. By clicking the X to close the banner, only technical cookies will be kept
Manage options Manage services Manage vendors Read more about these purposes
View preferences
{title} {title} {title}